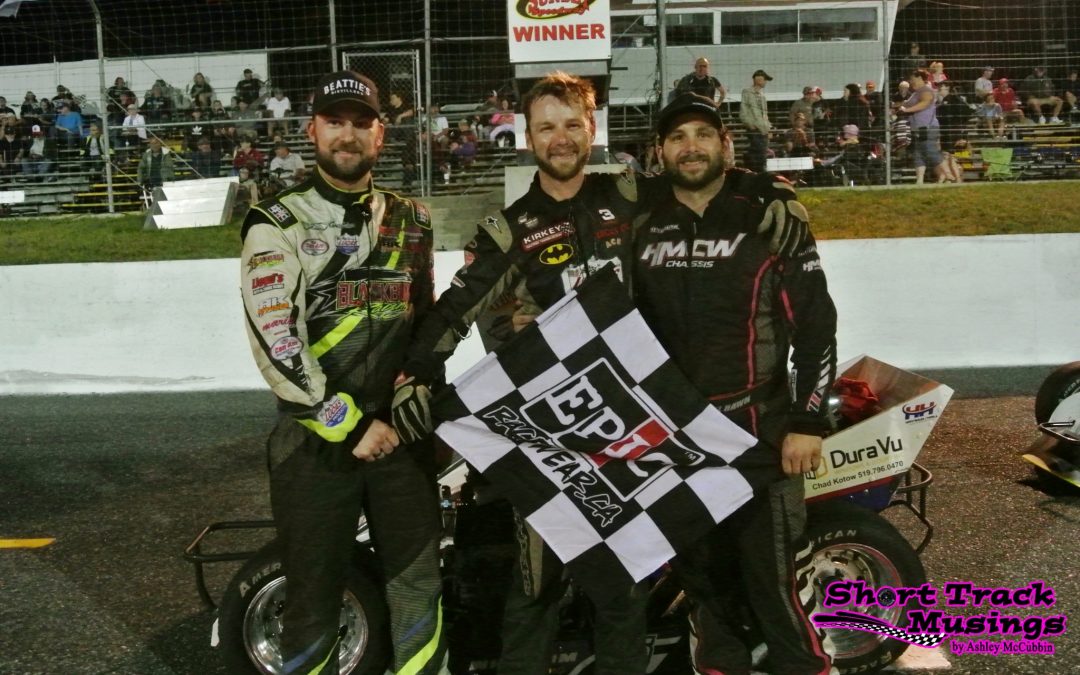 The Qwick Wick Can-Am Midgets presented by Miller Office Trailers rolled into Sunset Speedway in Innisfil, Ontario this past Saturday night for the second to last round of the 2022 season. Local company came on board for the night as the Can-Am Midgets welcomed Beattie’s Distillers back again to sponsor the night. Thank you for your continued support!

Practice was over for the drivers to dial in their cars and heat races got underway. Heat #1 sponsored by HMCW Chassis had Andrew Whelan (5) and Craig Pitchell (6) leading the field to green. Whelan led after lap 1 with Cory Whittam (55) and Jeff Blackburn (7) in toe. Whelan would relinquish the lead to Blackburn. The race would go green to checkered with Blackburn taking the checkered flag and your top 3 runners in points finishing 1,2, and 3. Heat race #2 saw David Miller (11) and James Stanley (57) on the front row. Stanley jumped out to the early lead. The field would spread out until the #68 car of Paul Jorgensen took a spin in turn 2. The restart saw Stanley black to the lead and never looked back. Stanley would visit HMCW Chassis victory lane.

Another Dash for Cash was set up for this race night all thanks to Larry Wilson at Larry’s Small Engines out of Orangeville. Thank you Larry for your support for 4 different drivers all season long! Whelan, Bob Bailey (46), Robert Polillo Jr (53) and Mike Coleman (44) would have a hard fought battle, all wanting the cold hard cash. It was the #5 car of Whelan who would take the win.

It was FEATURE time! 25 quick timed laps were up next for the fans who came out to Sunset Speedway. Whelan and Miller led the field to the green flag. Whittam, trying to stay in the championship hunt, powered around the outside to make it 3 wide for the lead bringing fellow championship contender, Blackburn, with him. A few laps of side by side racing before caution flew on lap 5, for what we believe was some debris in the racing line. Racing resumed with Whittam powering to the lead with the top three contenders for the championship now running in the top 3 in the race before caution flew for the spinning car of Pitchell in turn 3. Whittam went back into the lead with Blackburn keeping a close eye on the tail tank of 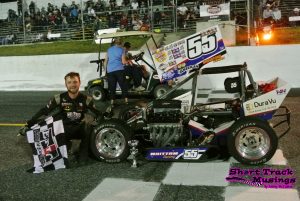 the #55 car. The middle of the pack was racing hard for position. A single car spin of Whelan would bring out the caution yet again. This time, a single file restart was ordered by race control. Whittam stayed in the top spot for the remainder of the race and bringing home the checkered flag. Blackburn, and Hawn joined him on the podium with Jr Farrelly (72) and Stanley rounding out the top 5. 11, 68, 6, 53, 5, 46, 44, 91, and 26 round out the finishing order.

Thank you to Beattie’s Distillers for sponsoring our amazing club for this race. We hoped you had a great night at the races! The Qwick Wick Can-Am Midgets are off this week in preparation for championship night at Flamboro Speedway on September 24th.