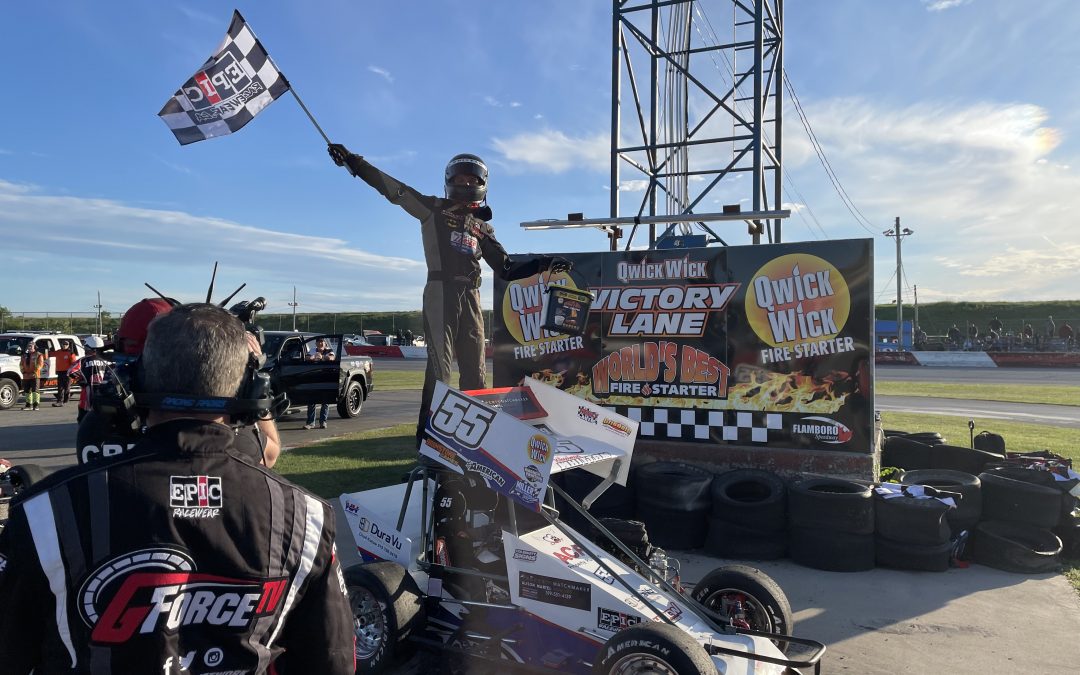 The Qwick Wick Can-Am Midgets presented by Miller Office Trailers continued their summer stretch of races with a trip to Sunset Speedway in Innisfil, Ontario. This was their first visit of the 2022 season due to a rain out in the spring. Beattie’s Distillers came on board as the title sponsor for all of the nights races. The drivers had to keep hydrated during the practice sessions with the high heat throughout the afternoon.

Heat #1 provided by HMCW Chassis got underway with Paul Harrison (29) and Cory Whittam (55) on the front row. Whittam and Daniel Hawn (42) powered round the outside to claim the top spots. Hawn got a run on the inside coming out of turn 4 to claim the lead. The race went green to checkered with Hawn taking the win. Heat #2 saw Craig Pitchell (6) and James Stanley (57) bringing the field to green. Pitchell took the early lead and never looked back taking the checkered flag and visiting HMCW Chassis victory lane.

The drivers had a bit of a break in between their heat races and feature event with local series from Sunset running their races. When the 15 drivers strapped in, they were ready to do battle for 25 laps. Pitchell and Whittam led the field to the double waved green flags. Pitchell flew out into the lead, but caution flew really quickly when Ryan Fraser, who was driving for Cliff Walsh (49) in his return to the club since leaving back in 2019, smoked the tires into turn 1 and coming down and collecting Andrew Whelan in the #5 car, ending his night with a broken suspension. Whittam and Pitchell were side by side on a new start for 2 laps until Whittam got the upper hand. There was 2 and 3 wide racing with drivers jocking for position. Whittam was out with a commanding lead until Hawn was able to catch up to the back tail lid of the #55 car. Looked like a battle for the lead was coming until Hawn spun out in turn 4 with 4 laps to go, bringing out the caution. Whittam pulled away on the final restart of the night, taking home his second checkered flag  of the 2022 season. Jeff Blackburn (7), Craig Pitchell (6), Jaden Riddell (13), and Brody Rickwood (83) rounded out the top 5.

Flamboro Speedway is the next race on tap for the 2022 schedule next Saturday night with the APC series live on GForceTV. More information to follow as it comes available.