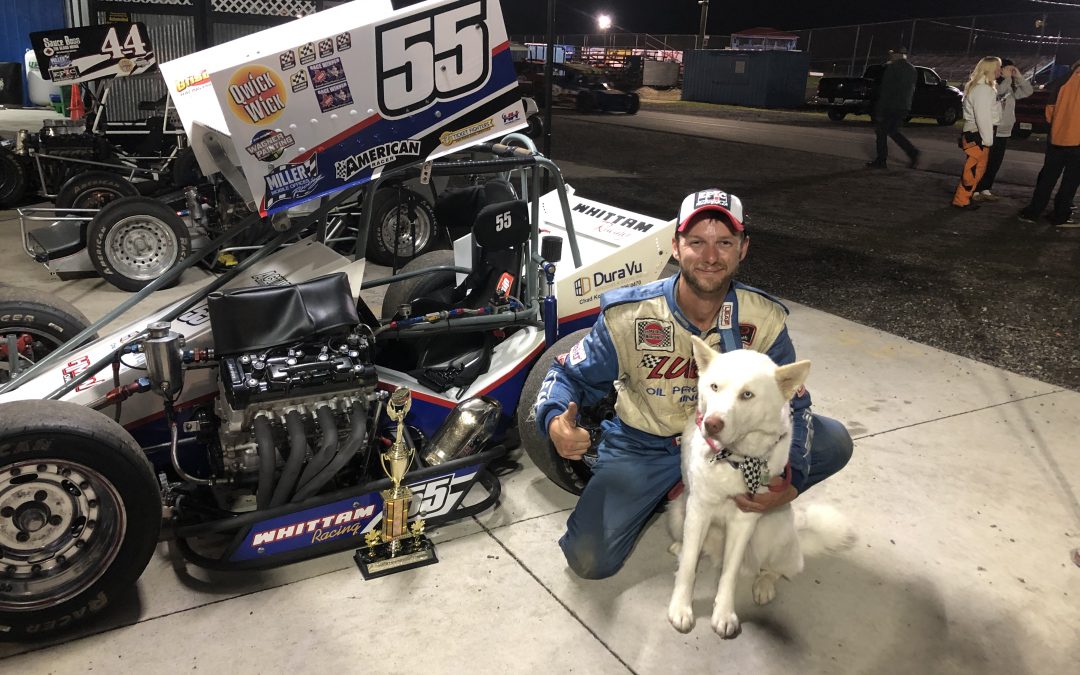 The Qwick Wick Can-Am Midgets presented by Miller Office Trailers had one last race in 2021 to settle everything on the track. The quick TQ midget club rolled into Flamboro Speedway in Millgrove, Ontario for Flamboro Machine Shop championship night. The rain was in the area, but held off to settle the 6 point gap between first and second place in the standings.

Heat #1 sponsored by HMCW (Hawn Motorsports Chassis Works) got underway with Craig Pitchell (6) and Brody Rickwood (83) taking the field to the green flag. It was David Miller (11) taking the lead after lap 1 from his 4th place starting spot. Miller pulled away from the field until lap 4 saw a caution for the #81 of Cassidy March hard into the outside wall after something broke in the front end ending his night early. Miller got a great restart and never looked back taking the checkered flag.

Heat #2 saw Paul Harrison (29) and Luc Munsie (26) on the front row for the start. Harrison and Munsie were side by side on the start, but the start was halted when Dominique Smith (49) stopped in turn 2 after her steering rack broke. A complete restart had Harrison and Munsie leading the field back to green. Jeff Blackburn (7) inherited the lead on lap 2, but this was short lived as Cory Whittam in the #55 car powered from his 4th place starting spot to take the lead from Blackburn on lap 3. Whittam never looked back with leading the rest of the way and taking the checkered flag in HMCW heat #2.

It was now feature time for the Qwick Wick Can-Am Midgets. 25 fast laps to settle the championship. The 16 drivers had one last 4-wide salute to the fans for 2021. After a few hot laps to warm up the tires and cars, Harrison and Rickwood brought the field to the green flag. Action came quick with Miller jumping over the right rear of another driver, sending him into the turn 2 wall. With heavy damage, Miller’s night was finished. David is ok after the wreck. The driver came to a complete restart with Harrison and Rickwood leading the field back to green. Rickwood took the lead after lap 1. That lead was short lived the the very quick 55 machine of Whittam coming from 5th starting spot to take the lead on lap 2. Caution flew when the #68 of Paul Jorgensen spun the #42 of Daniel Hawn. Hawn needed to charge through the field at this point with being in contention for the championship title. Whittam and Darren Mclennan (2) brought the field back to green. Whittam took the lead but spun all on his own a lap later bringing out the caution flag sending him to the back of the field. This inherited the lead to Mclennan. Clean and green this time. Mike Coleman (44) got into Pitchell in turn 4, but both drivers were able to continue without a caution. This looked to be Mclennan’s race to win until lap 24. The hard charging #55 car of Whittam came through the field and took the lead on lap 24 and took the last checkered flag of the 2021 season. Mclennan, Blackburn, Darren Dryden (X), and Hawn rounded out the top 5.

We want to take this time to thank all of the drivers, crew, officials for all their hard work in the 2021 season. To all the tracks for their hospitality and continued support of our amazing club! Than you to Frank from Qwick Wick Fire Starters for their title sponsorship this season. Jeff and Matt from Miller Office Trailers for their support. Flamboro Machine Shop for their sponsorship on championship night! Grisdale Racing Products, American Racer Tires, Neely Auto, EPIC Racewear ImageFactor, Wagner Painting, HMCW, RacePulse, Race Time Radio, Inside Track, and FireOut Protection for their amazing support in these trying times!