Whittam on Top at Flamboro 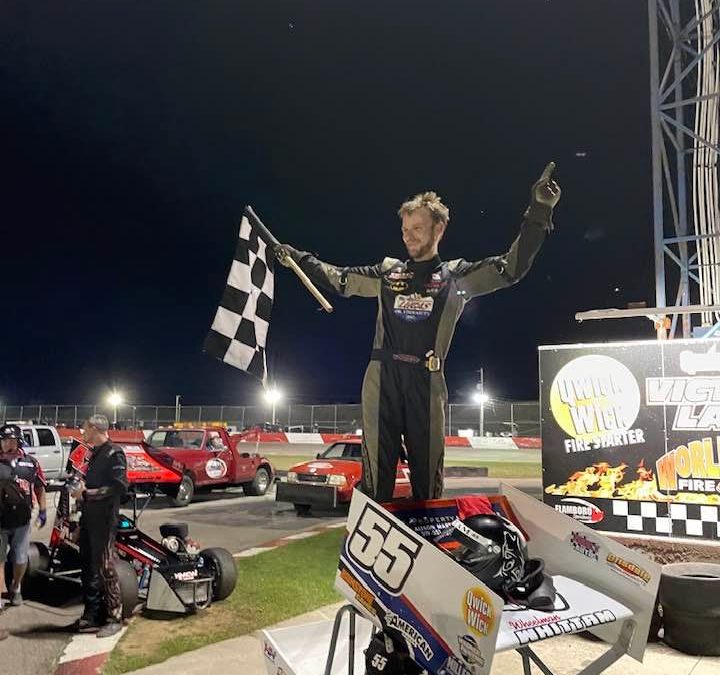 The Qwick Wick Can-Am Midgets presented by Miller Office Trailers rolled into Flamboro Speedway in Millgrove, Ontario this past Saturday. Cory Whittam (55) was the one everyone would be chasing as he won the last two races when the TQ midgets visited the 1/3 mile oval just outside of Hamilton. It was a very hot August day when the heat races came around. Brody Rickwood (83) and Whittam would take the HMCW Chassis heat wins before Cory missed the scales giving the win to Dominque Smith (49). Whittam would have some work to do coming from the rear of the field.

The 25-lap feature event saw Cassidy March (81) and David Miller (11) leading the 15 car field to the green flag. The field went three wide into turn 1 with Miller taking the lead out of turn 2. The field became single file all chasing the #11 car with Whittam in toe charging from the rear. Caution flew for Mike Coleman (44) stopped on the high side of turn 4. The field was led back to the green flag by Miller and Rickwood with Brody taking the lead off the restart. Smith in the #49 car would take the lead when Rickwood slowed with an issue with his car. Brody would go to the pits and retire from the race. The race would stay under green conditions. At the halfway point, the top three were Smith, Jeff Blackburn (7) and Whittam. The second caution flew for James Stanley (57) and Roberto Polillo Jr spinning out in turn 2. Smith and Blackburn restarted side by side with March spinning on the start on his own. He would be able to complete the full 360 and continue on without bringing out another caution flag. Caution did fly though for the #7 car spinning in turn 4. The restart got crazy with Whittam taking the lead and Smith slowing down the backstretch. This backed the field up causing the #68 car of Paul Jorgensen spinning collecting Bailey Brown (91) breaking suspension parts. The final restart of the night saw Whittam power out to the lead and took the checkered flag over Daniel Hawn (42), Miller, Blackburn, and Craig Pitchell (6).

The Can-Am Midgets are off this week in preparation of their double header set for Sauble Speedway on Labour Day weekend.