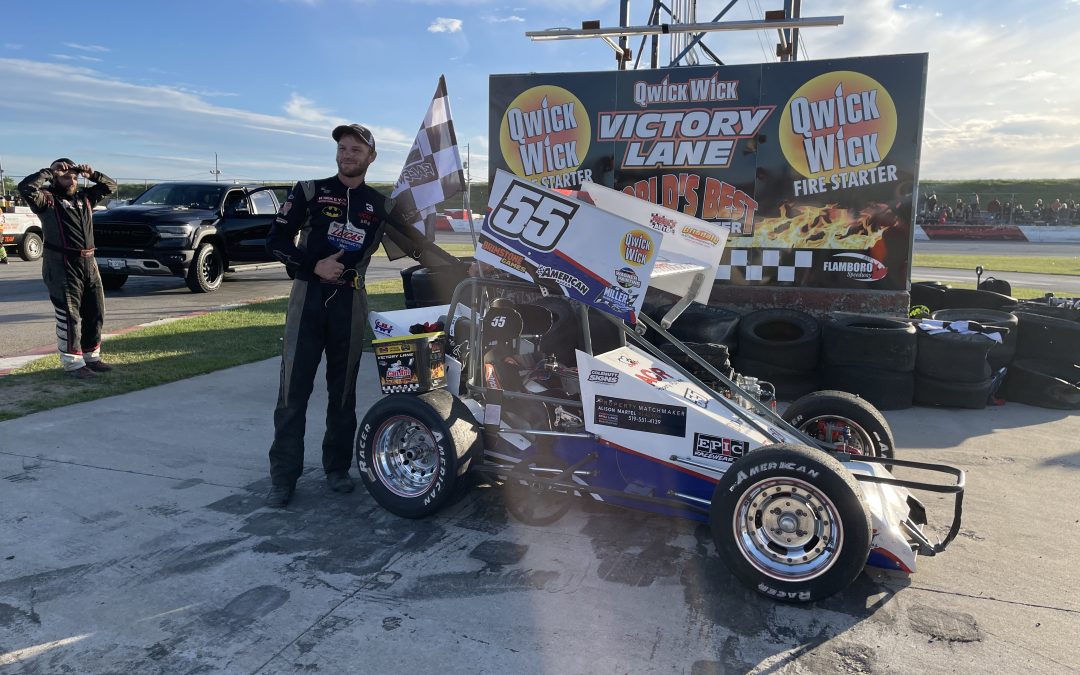 It was the final race of the long summer stretch for the Qwick Wick Can-Am Midgets presented by Miller Office Trailers this past Saturday night at Flamboro Speedway in Millgrove, Ontario. The TQ midgets were the support show as part of the APC United Late Model Series along with the Mini Stock Invitational.

The night got underway with heat race #1 brought to you by HMCW Chassis. The front consisted of Paul Harrison (29) and Craig Pitchell (6). Harrison got a good start and was out to the lead until Brody Rickwood (83) dove to the inside in turn 3 and claimed the top spot after lap 1. Cory Whittam (55) claimed the lead on lap 3 and never looked back as the heat race went green to checkered with Whittam taking the win. Heat race #2 saw David Miller (11) and James Stanley (57) lead the field to green. Miller and Stanley battled side by side for 2 laps before Miller claimed the lead on lap 3. Stanley was right on the tail tank of the #11 car. It was now a four car battle nose to tail before caution flew for the #91 car of Mike Westwood with a single car spin in turn 2. Miller and Stanley were again, side by side for the restart. This time however, it was James Stanley who took the lead. Stanley pulled away to claim the victory and visit HMCW Chassis victory lane.

Drama unfolded before feature time as the #55 car of Whittam was DQ’d for not visiting the scales as per the rulebook after winning his heat race. Cory would start scratch on the field for the 25-lap main event. Miller and Harrison were on the front row. Harrison jumped out to the early lead and was holding his own up front until the very hard charging car #55 of Whittam was on his way around the outside of the field. Cory had come from 14th to 3rd in just 3 quick laps. Caution flew on lap 9 for a single car spin on turn 4. Rickwood had busted a rim that made his right rear drop to the ground. This also saw Jeff Blackburn (7), who was your current point leader going into this race, slow on the backstretch. He had to be pushed by the officials back to the pits and would not return. The restart saw Whittam in the lead with Daniel Hawn (42) right on his tail. The 91 pulled off due to on going car issues. There were great side by side battles in the mid field of cars from start to finish with the #5 car of Andrew Whelan going for a last lap pass around the outside of Harrison. Whelan got loose, spun out on his own and ended up flipped over in turn 2. Driver was ok! Whittam took his second checkered flag in a row, with Hawn finishing second and Dominique Smith (49) rounding out your podium finishers after some horrible luck this season. David Miller and Jaden Riddell (13) rounded out your top 5. 29, 57, 6, 83, 81, 5, 46, 53, 91, 7, and 44 (DNS) rounded out your field.

Thank you to all of our amazing sponsors for their continued support this season week to week and keeping us going on the track! The TQ midget officials, drivers, and crews have a well deserved week off after a long stretch of races. They will be back in action with a double header weekend at Sauble Speedway July 30th and July 31st.