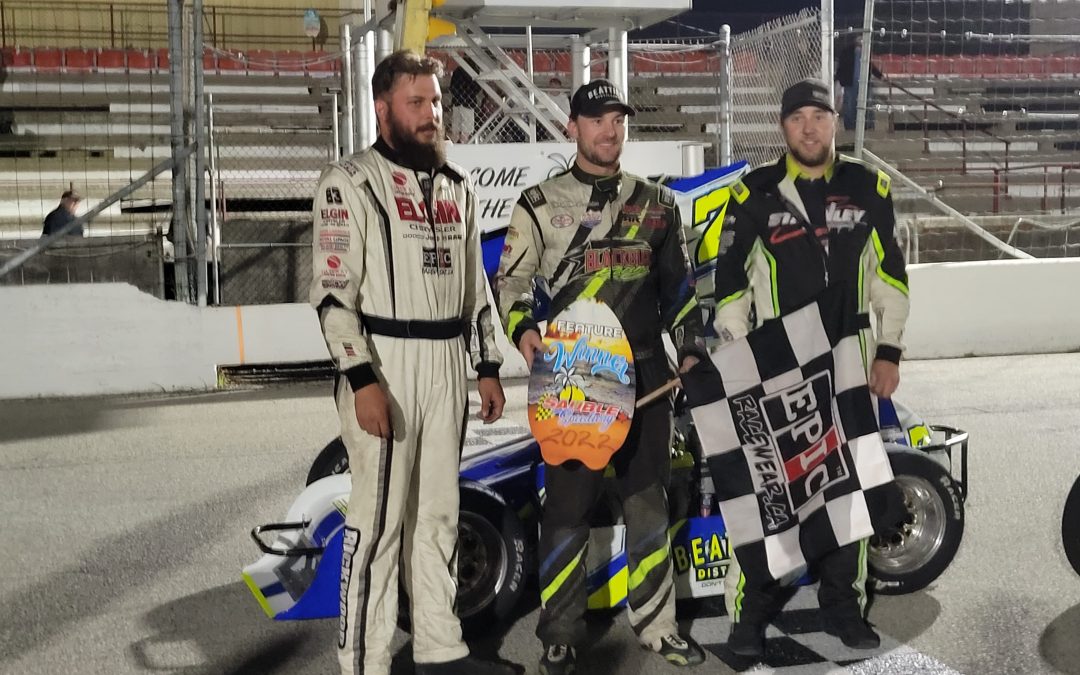 The Qwick Wick Can-Am Midgets presented by Miller Office Trailers drivers pulled up to their locked trailers after a nights of sleep in the Sauble area for night #2 at Sauble Speedway in Hepworth, Ontario. A few other drivers joined the party as well. The club had a record car count for 2022 with a total of 16 cars on the property. Some repeat cars along with new card out for the first time this season.

With practice over and cars dialed in, heat #1 sponsored by HMCW Chassis got underway with Paul Harrison (29) and Dominique Smith (49) leading the field to green. Smith was back in full force with her on going engine issues fixed. Harrison and Smith went side by side for the lead with Cory Whittam (55) trying to go 3 wide. Caution flew on lap 1. Harrison took advantage of the restart to take the lead out of turn 2. Whittam powered around the outside to the lead before caution flew for the #42 car of Daniel Hawn spinning in turn 4. Whittam took the lead on the restart and didn’t look back on route to the heat win. Heat #2 came on track with Craig Pitchell (6) and James Stanley (57) on the front row. It would be 3 wide down the backstretch with David Miller (11) thinking better of it and backing out of the gas going into turn 3. Stanley took the lead on lap 2. The race went caution free with James Stanley taking the checkered flag and visiting HMCW Chassis victory lane.

The TQ midgets were again, the headliner of the night. The 4 wide salute to the fans got the A-main feature underway. Harrison and Pitchell led the field to the green flag. It was Smith in the #49 on a tear to the front and took the lead after lap 1 with 15 other drivers ready to pounce. Whittam pulled off after the green flag due to engine issues. Cory is in the top 3 of the standings fighting for the championship lead. The leader of Smith would have issues comijng out of turn 4 just as David Miller was beside her battling for the lead. This brought out the first caution of the race. Miller would fire 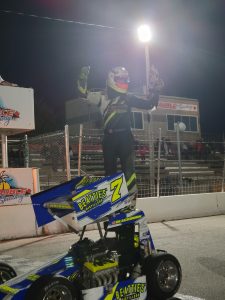 off quick into the lead before the #7 car of Jeff Blackburn took the lead next time around. Blackburn would be coming up on lap traffic with Hawn trying to reel him in. Hawn would spin out in turn 2 trying to catch the fast #7 machine bringing out the caution. This would bring the final restart of the night with Blackburn maintaining the top spot. Stanley (57), Brody Rickwood (83), Miller (11), and Jaden Riddell (13) would round out your top 5.

The Can-Am Midgets continue their summer stretch with their first visit to Sunset Speedway in Innisfil, Ontario next Saturday, July 9th. The first scheduled race in the spring was rained out at the 1/3 mile oval known as the “Thrill on the Hill in Innisfil.”