The Qwick Wick Can-Am Midgets presented by Miller Office Trailers rolled into Sauble Speedway in Hepworth, Ontario this past Friday for their first double header weekend of the 2022 season. Not many Friday shows in the past decade, but the drivers were out racing to celebrate Canada Day.

Heat #1 presented by HMCW Chassis for night 1 kicked off with Paul Harrison (29) and Craig Pitchell (6) on the front row for the green flag. Harrison took the lead out of turn 2 with Cory Whittam (55) and Jeff Blackburn (7) making it three wide for the lead after lap 1. It was Whittam taking the checkered flag in a caution free heat race. Heat #2 saw Brody Rickwood (83) and James Stanley (57) on row 1 for the green flag. Rickwood took the early lead before the hard charging #11 car of David Miller took the top spot after lap 2. Miller looked to take the checkered flag until Daniel Hawn (42) caught him and passed him to visit HMCW Chassis victory lane.

The 25-lap feature event was the last one of the night as these quick TQ midgets were the highlight of the night. Harrison and Rickwood led the field to the green flag. Brody powered on the outside in turn 2 to take the lead of the race. There was a three way battle for the lead between 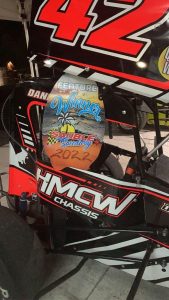 Rickwood, Miller, and Hawn before being joined by Whittam in the #55 car as well. Lapped cars had the top leaders side by side and single file. This had Stanley joining the party as well making the top 5 under a blanket. Caution flew for the #5 of Andrew Whelan stopped in turn 2. The restart had Hawn pulling away again until caution flew again for a spin in turn 2 from the #29 car of Harrison. A green, white, checkered finish was set with Ha

wn taking the checkered flag in the end over Whittam, Rickwood, Miller and Blackburn.