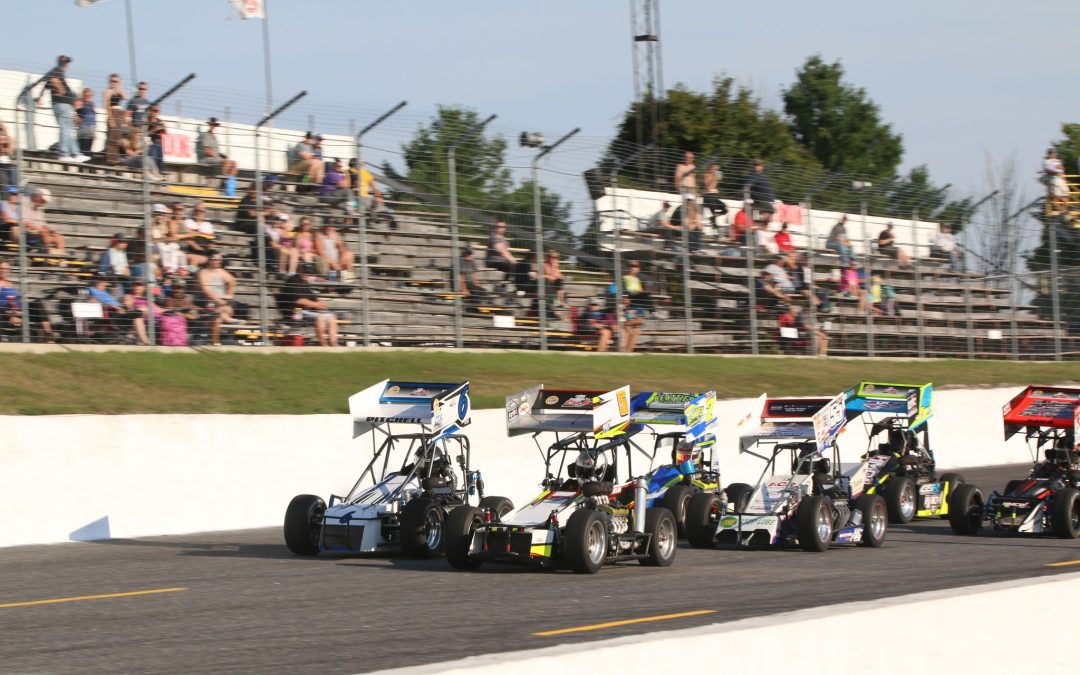 The Qwick Wick Can-Am Midgets presented by Miller Office Trailers had a week off. This was to lead up to their championship night, and to let the contenders prepare for what could be the best night of their racing career. The TQ midget drivers, crews, and officials roll into Flamboro Speedway in Millgrove, Ontario for the last race of the very exciting 2022 season. While the race day schedule has not yet been released of the day’s events, we asked our top 3 championship hopefuls some questions on how they are preparing for this Saturday’s important race…

Cory Whittam in the #55 car has had a dream season. Whittam has been bad fast everywhere the Can-Am Midgets have visited. Pulling away from the field, charging from the back to the front, and much more excitement. When asked if there were any changes happening in the shop this week to be ahead of his 2 other contenders, he said, “No changes to the car at all. The car has been quick. Just routine maintenance being done to make sure all parts are in working order.” Where do you think you need to finish on the track to be the 2022 champion? “Simple, finish 1st and hope for the best,” Cory responded. Whittam sits 34 points back in the standings after a couple rough races over the double header at Sauble Speedway. Cory will dedicate this championship to his Mom and Dad!

Daniel Hawn in the #42 car sits just 8 points back in the championship running. Hawn was the runner up in 2021 to Jeff Blackburn in what was a very close battle as well right to the last race of the season. We asked Hawn a few questions about that run last season, and what positives he could take into this year’s race to claim his first Can-Am Midgets series championship. Daniel responded, “I think to be honest, we just need to keep doing the same thing. We always bring a well prepared car to the track. I don’t have the nerves this year as I did last year, and being my second full time season, I have a bit more experience.” ” I think all 3 (championship contenders) are going through our notes. Ensuring every nut and bolt is gone through, maybe more than needed. I know I will be,” Hawn said when also asked if there was anything that has changed in the shop this week to be ahead of his fellow competitors. Where do you think you need to finish on the race track to be the one lifting the championship trophy? “We try to unload and win each week. So, I think that is what it’s going to take. A big part are the heat races (as points are awarded in heats as well). We need to start with that, and go from there. I have made some mistakes this year as a driver and put my team in a hole that we have had to come back from.” Hawn also added, “What people don’t understand is that this is only my second full time year. We only ran races here and there before, and then the pandemic hit. I’m proud for my team in fighting for a championship two years back-to-back. I’m looking forward to Saturday and leaving everything on the line to try and bring that championship home. Whatever happens, we will be ready for the outcome. One thing I can tell you, you will want to be at Flamboro Speedway to see how this unfolds!” Danie will dedicate the championship to his family. Not just by blood. Adam Hagan, Tyler Hawn, Brittany Friesen, Iain Bass, his Mom, and mostly to his Dad!

Jeff Blackburn in the #7 car was the 2021 series champion. His first championship trophy with the Can-Am Midgets. He is also the current point leader in this very tight battle. 8 points ahead of Hawn and 34 ahead of Whittam. Blackburn was sent the same questions and had some good answers. And these answers do seem to make him look like he is ready to defend his title! What can you take out of last year’s championship run that you can use to go back to back? Blackburn responded, “That is a tough first question. It was a close last year and we are in the same boat this season. Not sure there is much you can do other than have your equipment up to par, and be mentally prepared. If there is one thing I can pull from last year is to keep my mind cool and collective.” “Not much has changed in the shop. The same routine we go through every week. Completely go through the car, check every bolt, make sure our scale numbers are perfect,” Jeff commented. Where do you think you need to finish on the track to be champion? Jeff replied, ” Win and I don’t have to worry. After doing some math, I have to keep Cory in close proximity, and beat Hawn at the end of the night.” If all goes well, Blackburn will dedicate this championship to his family and friends who support him. His dad, mom, Flo, Brin, Austin, Eric, Teresa, Kenny, and Kimmy.

Follow our facebook, instagram and website all week to keep up to date leading up to Saturday. Race day schedule will be released very soon. Good luck to all drivers and crews running for the championship.