The drivers got their cars dialed in during practice times in the morning and afternoon sessions. Heat race #1 presented by HMCW got underway with Craig Pitchell (6) and Paul Harrison (29) taking the field to green. Jeff Blackburn (7) tore into the lead after lap one and after starting 6th on the start. This heat race went green to checkered with Blackburn taking the checkered flag.

Heat #2 rolled onto the track with Luc Munsie (26) and Paul Jorgensen (68) taking the field to green. Munsie got the upper hand on Jorgensen, but Dominique Smith (49) took the lead after lap 1. This race also went green to checkered with Daniel Hawn (42) passing Smith on the last corner to bring his car into HMCW victory lane.

The drivers and crew had a long while to make any adjustments on their cars as the track was doing their qualifying races for their event on Sunday. The 25-lap feature event was the last of the evening. The drivers saluted the fans for their support with a 4 wide salute and wave to the crowd. Munsie and Rickwood (83) led the field to green. Smith went into turn 1 and locked her tires up, getting into Rickwood. The field checked up causing a couple drivers to tangle into each other. Everyone got away and it was Munsie to the lead. Smith was on his tail with a move into turn 3 on lap 2 taking the lead from the #26. Darren Mclennan (2) pulled off due to damage from the issue in the first corner on lap 1. Smith was able to lead until Blackburn stormed through and inherited the lead from Smith on lap 7. Tight racing up front with the race going green to checkered and Blackburn never looking back once he took the lead. Blackburn took the checkered flag with Hawn, Whittam (55), Smith and Munsie rounding out the top 5. Rickwood, Miller (11), Riddel (13), Jorgensen, Pitchell, Harrison, Coleman (44), Bailey (46), Mclennan, and Paul Smith (28) rounded out your finishing order. 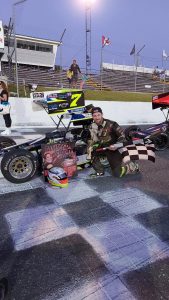 All of the drivers, crews, and officials would like to say thank you to Jeff and Matt Miller of Miller Office Trailers for coming out Saturday to see what we are all about. And from each and every one of our members, thank you for your amazing support! We hope you enjoyed the show.

The Qwick Wick Can-Am Midgets presented by Miller Office Trailers has a very tight points battle for the championship. And it all comes down to next Saturday at Flamboro Speedway. You won’t want to miss this one everyone!