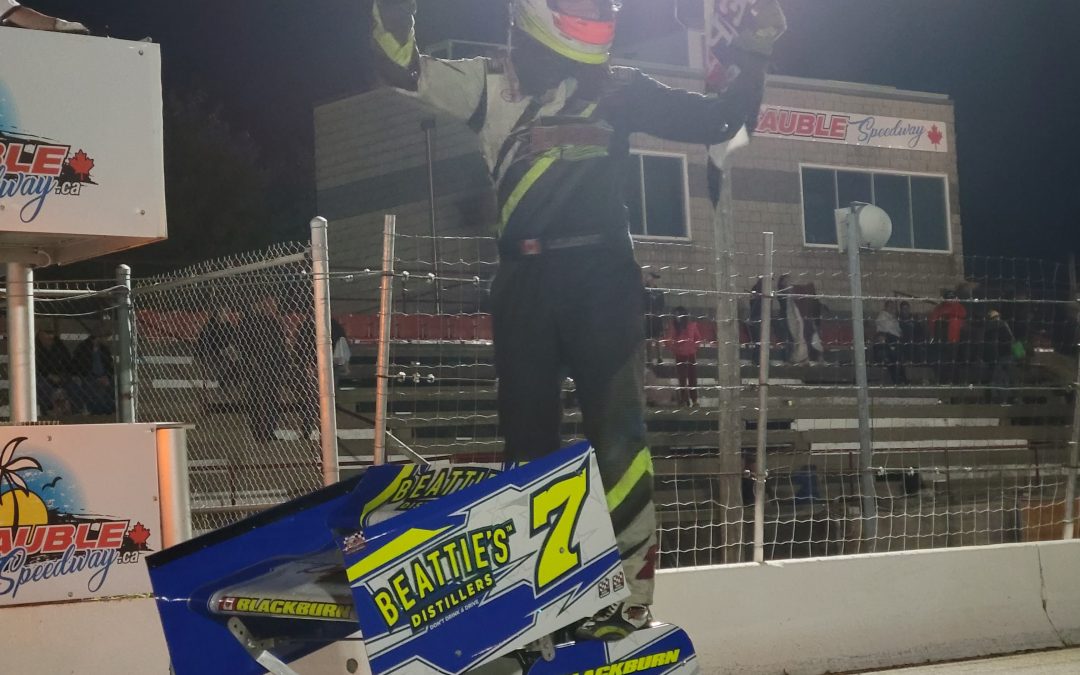 The Qwick Wick Can-Am Midgets presented by Miller Office Trailers had a wild race on night #1 at Sauble Speedway in Hepworth, Ontario with Jeff Blackburn in the #7 car taking the checkered flag. The drivers, crews, and officials stayed in the area, enjoyed the beach on Sunday, relaxed before returning to the track on Sunday afternoon for night #2 of the double header weekend. The legend cars and late models were present again for Beat the Heat 150.

Heat race #1 presented by HMCW Chassis had David Miller (11) and Cassidy March (81) lead the field to green. Miller powered out to the lead with James Stanley (57) right on his tail tank. Stanley took the lead out of turn 2 on the inside of Miller. The race went green to checkered with Stanley taking the win. Heat race #2 saw Paul Harrison (29) and Brody Rickwood (83) on the front row. Harrison took the early lead before Daniel Hawn (42) raced side by side to take the lead into turn 1. This race was caution free as well with Hawn visiting HMCW Chassis victory lane.

Sunday’s race night was a little bit different with 4 racers running a 6-lap sprint Dash for Cash race. No points, just bragging rights and cold hard cash to the winner! Jr Farrelly stepping in the 46 car for this race night, Rickwood, Dominique Smith (49), and Mike Westwood (91) were all participants. With all 4 cars nose to tail from start to finish, Rickwood took the checkered flag and earned the cash. Thank you to Larry Wilson from Larry’s Small Engines for sponsoring this race, and helping out our loyal teams!

The TQ midgets were the first feature up after intermission. The 15 car field performed the 4 wide salute to the amazing fans who packed the stands for both nights of racing. Miller and Harrison led the field to the green flag. Caution flew on the first lap for Harrison and Rickwood coming together on the backstretch collecting Smith in the 49 car. This gave the #11 machine of Miller the lead on the restart. The 49 car of Smith would pull off with issues from the contact on the start. Caution flew for the spin of Brian Woodland (48). Stanley would take the lead from Miller on the restart with the winner from night #1 right on his tail. Blackburn shot to the inside and took the lead from Stanley. Westwood slowed and pulled to the pits with another fuel pressure issue. Blackburn and Stanley had to fight through lap traffic with the rest of the race going green. Blackburn was able to hang on to the lead and sweep both nights at Sauble Speedway. Stanley and Hawn joined Jeff on the podium with Jr Farrelly, and David Miller rounding out the top 5.

Rickwood, Andrew Whelan (5), Harrison, March, Bob Bailey (72), Mike Coleman (44), Woodland, Westwood, Cory Whittam (55), and Smith rounded out the finishing order. Thank you to Sauble Speedway for their hospitality all weekend. The Can-Am Midgets are off for a couple of weeks and will be back on track at Flamboro Speedway on August 20th. Enjoy the summer break!