Blackburn Back in Victory Lane 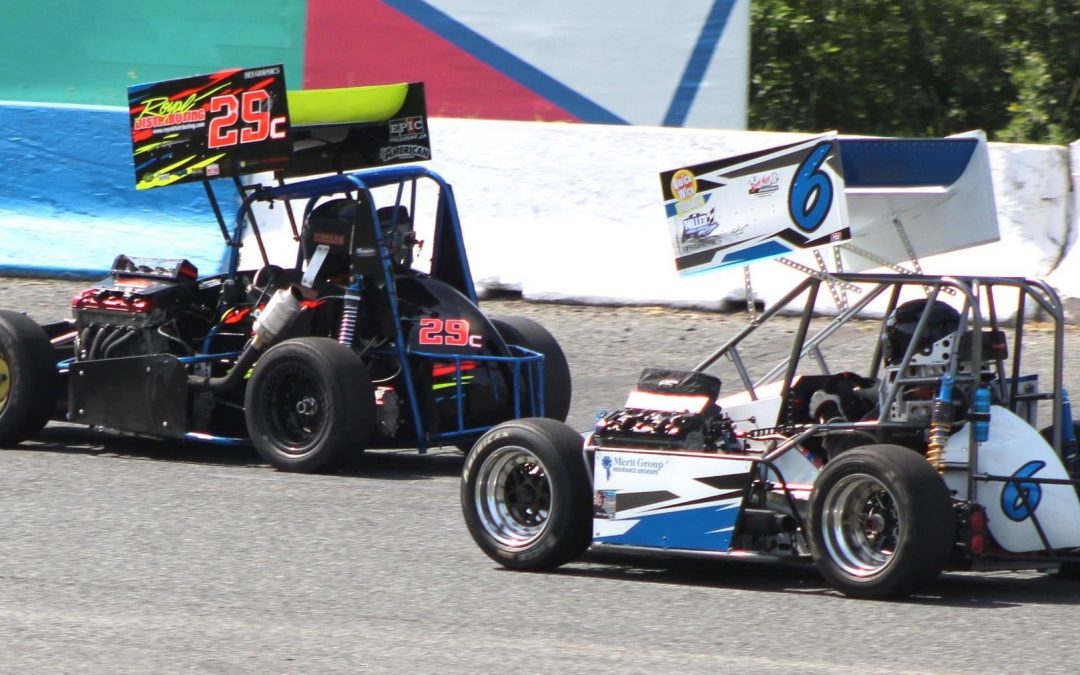 The Qwick Wick Can-Am Midgets presented by Miller Office Trailers rolled into Peterborough Speedway in Cavan, Ontario this past Saturday night for their one and only annual trip to the track. The drivers and crews had two practice sessions to get their cars dialed in and a feel for the track for the drivers who have not been to Canada’s Toughest 1/3 Mile Oval before.

The HMCW Chassis heat races got underway with the #83 of Brody Rickwood and the #29 of Paul Harrison leading the field to green in heat race #1. It was Rickwood who got the jump out into the early lead. The #7 of Jeff Blackburn followed him through and it was Blackburn who took the lead on lap 2 and never looked back as the race went green to checkered. 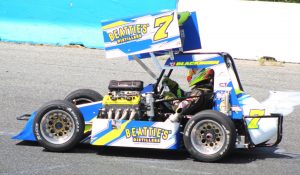 Heat race #2 saw the #6 car of Craig Pitchell and the #57 of James Stanley on the front row. Dominique Smith (49) made the call for pace laps, but pulled off with engine issues before the green flag dropped. The pair of Pitchell and Stanley fought into turn 1 with Stanley powering on the outside to take the lead. This heat race also went green to checkered with Stanley taking the checkered flag for HMCW Chassis victory lane. This was James’ first heat win with the Can-Am Midgets. However, it was short lived due to Stanley not going to the scales to get weighed as per the rule book. He was DQ’d by officials and that handed the heat win over to Cory Whittam in the #55 car.

The 25-lap feature race was up next. Smith (49) was unable to make the call again due to her engine issues continuing and they didn’t want to risk huge damage to the power unit. The 13 car field performed their 4 wide salute to the amazing fans at Peterborough Speedway and warmed up their tires in hot laps. It was Rickwood (83) and Pitchell (6) leading the field to green. Rickwood blasted to the lead with Blackburn right on his tail. Blackburn sliced to the inside in every corner, but was unable to make the pass until enough grip off turn 4 got him the lead going onto lap #4. Blackburn with about a half a straightaway lead, came into lap traffic. Two cars of Mike Coleman (44) and Roberto Polillo (53) were side by side. This brought Rickwood (83), Whittam (55) and Daniel Hawn (42) to the tail fin of the #7 car making it a four way battle for the lead. Rickwood was all over the back of Blackburn, but was unable to pass him as Blackburn took the checkered flag after the 25th lap. Rickwood (83), Hawn (42), Whittam (55), and David Miller (11) rounded out the top 5. 57, 6, 46, 5, 29, 53, 26, 44 and 49 (DNS) rounded out your field.