Blackburn and Stanley – Victors at Sauble 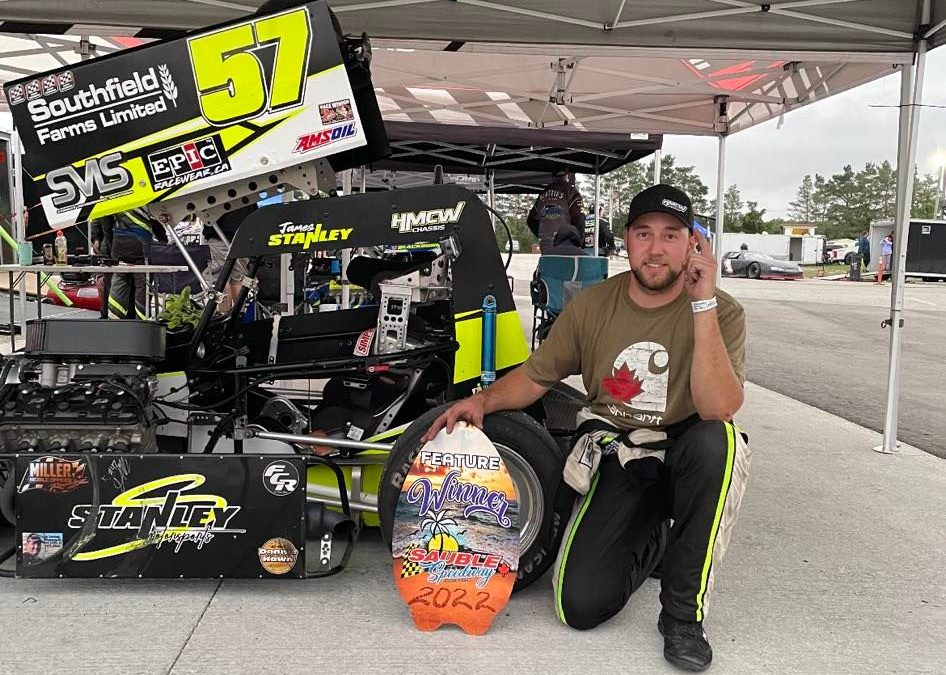 The Qwick Wick Can-Am Midgets presented by Miller Office Trailers were racing at Sauble Speedway in Hepworth, Ontario this past Labour Day weekend. This was the third and final double header of the season. Much anticipation and talk went into this weekend with a very close points battle among the top three drivers for the 2022 championship.

Night #1 got underway with heat races sponsored by HMCW Chassis. Paul Harrison (29) and James Stanley (57) led the field to green. The #42 car of Daniel Hawn went to work quick, taking the lead after lap 1. This race went green to checkered with Hawn taking the victory. Heat 2 saw David Miller (11) and Cory Whittam (55) on the front row. Miller got the jump and took the early race lead. Whittam fought back side by side before taking the lead at the halfway mark and going on to visit HMCW Chassis victory lane. Whittam also went on to win the Dash for Cash race. Thank you to Larry Wilson from Larry’s Small Engines for sponsoring that race!

The 25-lap feature event saw Miller and Stanley lea the field to the green flag. Chaos on the start with Bob Bailey (46) having to avoid another car and diving into the infield. He was able to continue on. Whittam took the race lead before Bailey spun out in turn 4. The restart had chaos with Mike Westwood (91) getting loose and collecting the #57 car of Stanley ending both their nights. Whittam led the field to green on a single file restart. Miller and Hawn touched racing hard for 2nd place, but both drivers were able to continue on with no caution flag. Caution did fly however for the spin off turn 4 of Andrew Whelan (5). Double file restart this time with Jeff Blackburn (7) making a dive on the inside of Whittam to claim the lead. Hawn was trying everything he could to catch Blackburn, but unable to do so, the #7 car was back in victory lane! Hawn second and Whittam third. 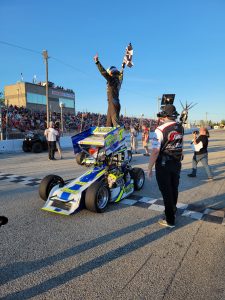 Night #2 was next, and a lot more at stake. The top two drivers were tied with third only 7 points behind. All eyes were on cars #42, 7, and 55. Heat races got underway with Whelan and Brody Rickwood (83) on the front row. Rickwood missed the start and spun in turn 1 trying to re gain the space he had lost, collecting Jr Farrelly (72) and Miller. All avoiding contact. Full start now saw Whelan and Blackburn lead the field to green. Caution flew with Whelan and Miller spinning in turn 1. The restart had yet another caution with Bailey Brown (91) spinning off turn 2. Jr Farrelly took the lead on the restart and claimed his first heat win with the Can-Am Midgets. Heat 2 brought to you by HMCW Chassis saw Stanley and Whittam lead the field to green. This race was less chaotic going green to checkered with Whittam taking the victory.

The first feature of the night were the Qwick Wick Can-Am Midgets. Stanley and Rickwood were on the front row. Stanley took the early lead with Whittam right on his tail tank. The field went single file for most of the race. Whittam catches a break and caught up with Stanley while passing a lapped car. Whittam dove his nose in a few times. Going for the checkered flag, Whittam spun out of turn 4 going for the win. Stanley picked up the checkered flag and his very first feature win with the Can-Am Midgets. Jr Farrelly and Daniel Hawn rounded out your podium.

The drivers have a quick turn around with racing set at Sunset Speedway this coming weekend where Beattie’s Distillery will be coming on board to support this race at their home track. Thank you to everyone at Beattie’s for their support!