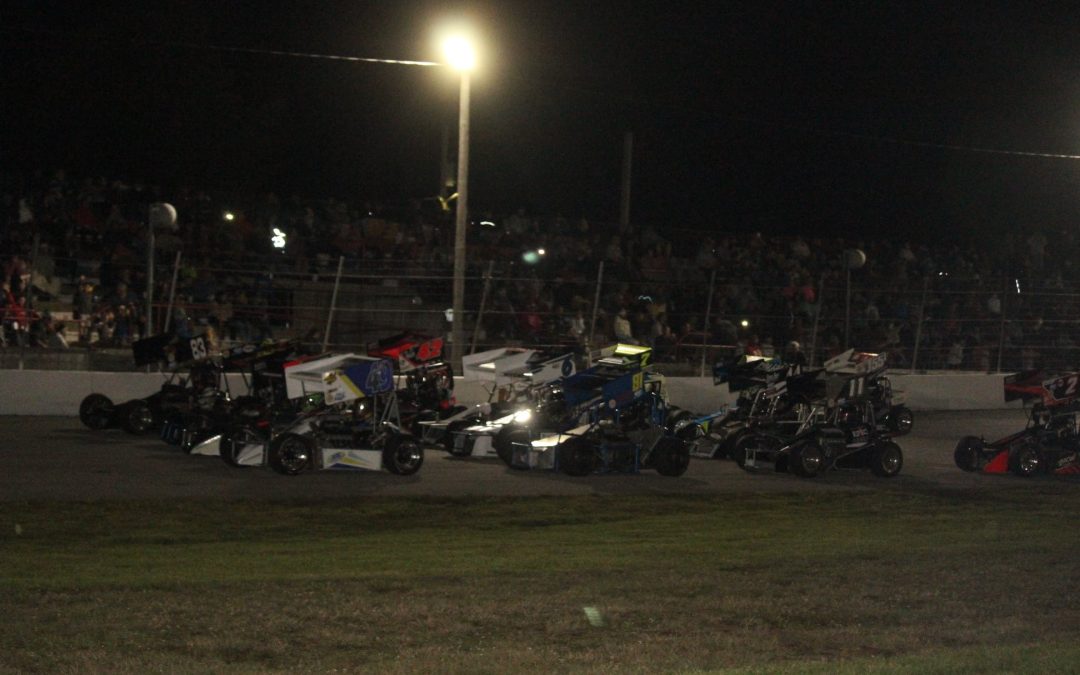 With everyone having to stay dry overnight, night #2 at Sauble Speedway saw sunny skies throughout the day. But, after a brief rain shower after practice ended, the track officials did a great job drying the track in time for the races to start at 6 p.m.

Heat #1 presented by HMCW got underway with Luc Munsie (26) and Craig Pitchell (6) bringing the field to the green flag. Munsie roared down the backstretch only to have David Miller (11) charge to inside and take the lead. Miller never looked back in the green to checkered race, taking the win in heat #1. 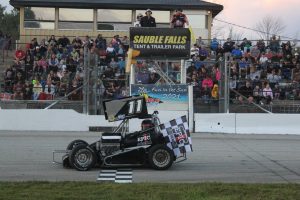 Heat #2 saw the #29 of Paul Harrison and the #49 of Dominique Smith on the front row coming to green. Smith soared to the lead. The #7 TQ midget of Jeff Blackburn fought his way to second and was catching Smith. Blackburn ran out of laps with the race going green to checkered as well seeing Smith take the race win and pulled into HMCW victory lane. 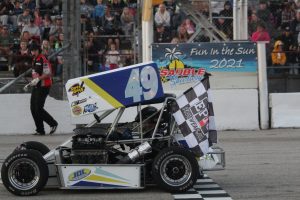 The Qwick Wick Can-Am Midgets had a brief delay in action with make up features and qualifying taking place in between their heats and feature. Plenty of time for any last minute adjustments. The 25-lap feature event had Smith, and Brody Rickwood (83) lead the 4 wide salute to the amazing crowd on hand braving out the rain fall and rain warnings. There was action in the first corner when a bolt broke on the axle of the #81 machine of Cassidy March, sending him into a spin in front of the field. Everyone got away cleanly. Smith had the early lead on the restart for a few laps until the caution flew on lap 3 for the #68 machine of Paul Jorgensen having mechanical issues ending his night early. The restart saw Blackburn 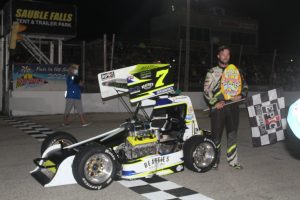 jump into the lead past Smith and Daniel Hawn (42). The close racing went the rest of the way under green flag conditions with Blackburn taking the checkered flag over Hawn, Smith, Miller, and Darren Mclennan (2). Rickwood, Whittam (55), Munsie, Pitchell, Coleman (44), Bailey (46), Harrison, Jorgensen, and March rounded out the finishing order.

The Can-Am Midgets are off this coming weekend with a break in their schedule. We have 2 races left starting with Sunset Speedway in Innisfil, Ontario next Saturday, September 18th as part of their Velocity weekend. We will keep everyone updated on our website and social media on start times, and race day schedules. Enjoy the weekend off everyone!