Warning: Use of undefined constant CTF_VERSION - assumed 'CTF_VERSION' (this will throw an Error in a future version of PHP) in /home/customer/www/canammidgets.com/public_html/wp-content/plugins/ai-twitter-feeds/ai-twitter-feeds.php on line 519

DeMan Back and Back in Victory Lane 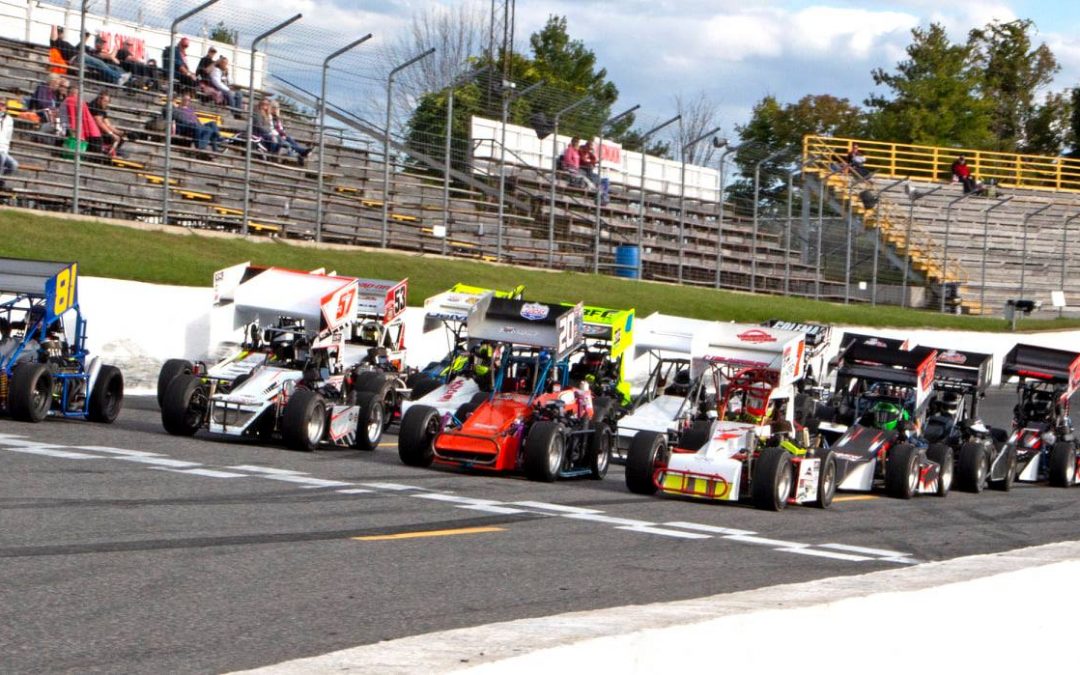 Saturday afternoon’s Fall Velocity saw eighteen Can-Am Midgets take to the high banked pavement of Sunset Speedway. Including two former champions, Mack DeMan and Adam Racine making their return in a stacked field of drivers. As well as two new rookies, Mike Coleman #44 and Elliott Munsie (Luc’s brother) #26 making their first starts in the series.
And for the first time this season for our club, we had fans in the stands! Thank you race fans and it was great to see you sitting there while we put on a great show!
The action got underway with the first of two heat races taking the green flag, with Cassidy March in his new #81 car starting from the pole, alongside Paul Harrison in the #29. Daniel Hawn who had started 4th made a three wide pass on the start to take the lead and never looked back. David Miller finished 2nd and March rounded out the top 3. Prior to the start of the heat, Mack DeMan pulled off with left front suspension problems and the #54 of David Mathers was out with engine problems. 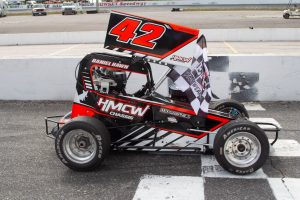 Next up was Heat #2, which saw Brody Rickwood in his #83 machine and Jeff Blackburn in the #7 making up the front row. Blackburn showing good speed all day long jumped out to the early lead. As defending champion Darren Dryden and former champion Adam Racine battled their way through the field in an attempt to chase Blackburn down, with Racine taking over the 2nd position on lap 2. The caution flew for the first and only time of the race on lap 5, when Mike Cole

man driving the Barry Dunn #44 car spun in turn 4. On the restart Blackburn held the lead into turn one, but lost it to Adam Racine who slipped by in turn 3. Racine went on to lead the rest of the way taking the win, with Blackburn 2nd and Dryden 3rd.
Finally the moment that everyone had been waiting for, the 25 lap A-feature had 17 driver take the green flag. David Mathers continued to have engine woes and pulled off prior to the start. Regardless, Jeff Blackburn and Cassidy March made up the front row with the biggest field of the year behind them. Blackburn pulled away early as Darren Dryden and Adam Racine jumped into 2nd and 3rd by lap two. Shortly thereafter Racine made contact with the back of Dryden’s #12 machine spinning him around in turn 2, sending both drivers to the back of the field on the restart. Which allowed Hawn and DeMan to move into 2nd and 3rd, with Blackburn still leading. Two laps after the restart DeMan made his move for the lead on Blackburn and made it stick. However 8 more cautions slowed the race for self spins by various drivers, with the one of the more climactic cautions coming out for contact between Adam Racine and Darren Dryden again, this time the defending champion had to retire from the race with a broken rear panhard bar. The final incident that required a yellow flag, happened on the following restart with the Munsie brothers (Luc and Elliott) spinning in turn 2. DeMan held strong for the remaining laps taking home the victory, with Jeff Blackburn 2nd and Brandon Hauck rounding out the top 3 positions.

We’d like to thank Miller Mobile Office Trailers, Fenwick Motors Subaru and Hyundai of Sarnia, Wagner Painting, HMCW Chassis, Epic Racewear, Grisdale Enterprises, American Racer Tires, Neely Auto, Flamboro Machine Shop, Image Factor for all their support this past weekend and all season long!
We hope the COVID pandemic will subside and we can get back to seeing all our great fans and drivers back for the 2021 season! Thank you all for your continued support of the Can-Am Midget series!